-  Calcium and phosphorus play an important role in bone mineralization.  Therefore, one glass of goat's milk
provides 32.6% of the daily value for calcium and 27% for phosphorus, compared to 29.7% cow's milk (for
calcium) and 23.2% (for phosphorus).

- A glass ﻿of goat's milk contains 27% more selenium than cow's milk which is a key essential mineral in keeping
the immune system strong and functioning normally.


Energy
-  Goat milk is high in riboflavin, which is essential for the production and maintenance of energy in your body.


Less Allergenic
-  In the US the most common food allergy for children under three is cow's milk.  The allergic reaction can be
blamed on a protein allergen known as Alpha s1 Casein found in high levels in cow's milk.  The levels of Alpha s1
Casein in goat's milk are about 89% less than cow's milk providing a far less allergenic food.


Naturally Homogenized
-  If you were to place a glass of fresh cow's milk and goat's milk in the refrigerator overnight, the next morning you
would find the cow's milk separated into 2 distinct "phases" of cream and skim milk, but the goat's milk will look
the same.  The cow's milk separates due to a compound called agglutinin.  Homogenization forces the milk through a
tiny hole under pressure which destroys the fat globule cell wall and allows the milk and cream to stay
homogeneous or mixed.  Goat's milk has smaller fat globules and does not contain agglutinin which allows it to stay
naturally homogenized.

Easier to Digest
-  Goat's milk has smaller fat globules as well as higher levels of medium chain fatty acids.  This means that during
digestion, each fat globule and individual fatty acid will have a larger surface-to-volume ration resulting in a
quicker and easier digestion process.

Great as a Luxurious Moisturizer
-  Goats milk has amino acids and vitamin A to nourish the skin. Goat milk also contains lactic acid, which is an
exfoliant,  this helps cleanse and soften the skin.  Goat's milk has a pH level that is closest to our own skin making
it gentle and skin loving even on the most sensitive skin. 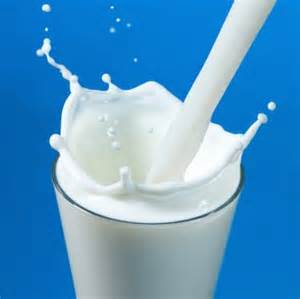 Have you had your Goat's milk Today?

Goat meat has been a mainstay in the diets of many cultures for centuries.  Approximately 75% of the world's population eats goat meat.  The Alabama Cooperative Extension notes that, as of 2010, goats provide 63% of the red meat consumed world wide.

Rather than identifying and purchasing goat by the cut, such as pork ribs or rump roasts, consumers generally purchase goat meat according to the age of the animal at time of slaughter and typically buy whole or half carcasses.  Cabrito, considered a delicacy in Central and South America, comes from goats no more than 3 months old that weighed less than 50 lb at time of slaughter.  Chevon is the meat from goats that were 6 to 9 months of age and weighed  between 50 to 75 lb at slaughter.  Mature goat meat comes from animals above 1 year of age.

It has a good flavor and is very healthy. It is low in fat, cholesterol, calories, and saturated fat. In fact, goat meat is over 50% lower in fat than our American beef and is about 40% lower in saturated fat than chicken, even chicken cooked with the skin off!  The following meat comparison (per 3 oz. roasted meat) table is from the USDA Handbook: